What are Some of the Benefits & Drawbacks of Fly Fishing with Crustaceans in Colorado? 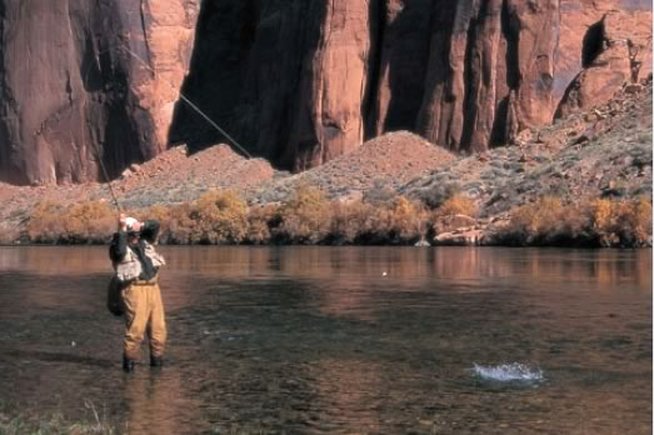 There are more than 1,100 species of freshwater crustaceans in North America, but only a few are important to tailwater anglers scuds, sow bugs, and Mysis shrimp.Aquatic crustaceans are commonly identified by their two pairs of antennae, jointed legs, and highly visible segments along the abdomen. Unlike aquatic insects (midges, caddisflies, mayflies, and stoneflies) aquatic crustaceans do not go through an adult phase. As they grow and molt they all look the same, with the exception of their size, until they reach maturity. Because they remain in an aquatic state throughout their entire life cycle, there are no hatches associated with aquatic crustaceans.

Scuds have a flattened, segmented body, fourteen pairs of legs, antennae, and a tail. They are powerful swimmers, darting around the bottom of the stream. They use their legs and tail to travel along the substrate, twisting and turning as they swim through dense aquatic vegetation. They curl up into a ball for protection when danger arises.

Some of the best scud fishing occurs during higher flows, or periods of extreme variation. For instance, in the South Platte’s Cheesman Canyon, the rising water during the initial phases of spring runoff flushes many of the larger food organisms—scuds, aquatic worms, crane flies, and stoneflies—loose. When fish key on scuds during that time, it can be some of the best nymph fishing of the year.

Tailwater anglers should carry a variety of colors in their scud collections. The most common colors are gray-olive, tan, and orange. When I take seine samples, 99 percent of the scuds are a gray-olive, with the occasional tan scud. I have never collected an orange scud in a seine sample. Stomach pumps reveal a different scenario frequently you get a mixed bag of orange and olive scuds. It’s not clear whether the trout ate the dead scud, which turns orange, or if the scud turned orange in the trout’s belly.

On certain tailwaters, imitations of tan scuds, Crangonyx gracilus, are effective. Back when I first  began fishing the Green River in Utah, the 191/2 Scud was the ticket (a 50-50 mix of Ligas Dubbing #19 and #20) to catching large trout below the dam. Scuds turn a tan color when they molt, when the scud sheds its old shell and replaces it with a new, shinier shellback.

Trout key on scuds when they are molting because they are soft and easy to eat. Other anglers, including Roger Hill, fish tan scud patterns to imitate trout eggs during the spawning periods. He has had tremendous success fishing tan scuds at the Spinney Mountain Ranch during February and June when the trout move up out of Elevenmile Reservoir to spawn.

Orange scuds are important too. Tailwaters with substantial flow variations due to hydroelectric power generation leave scuds stranded along the streambed when the river drops. The scuds turn orange quickly after they die, and then get knocked loose when the flow rises again, creating a feeding frenzy. This occurs on most tailwaters where flow fluctuations occur.

Trout also take orange scud patterns as egg imitations, and during the spawning periods, anglers frequently fish a scud as an attractor and drop a mayfly or midge behind it. Concentrate your efforts in the faster slots and seams behind the spawning areas where eggs are drifting downstream.

While not as prevalent as scuds, sow bugs, sometimes referred to as cress bugs, are important in a few Western tailwater fisheries. As the name implies, you’ll find populations of sow bugs (cress bugs) in cooler spring creeks and tailwaters where watercress abounds. It’s not uncommon to see trout trying to dislodge sow bugs from the rooted vegetation, and capitalizing on this helpless food organism as it floats downstream.

Sow bugs are extremely important on the Bighorn River in Montana below Yellowtail Dam. Sow bugs are typically gray, and have a flat, segmented body and seven pairs of legs that protrude sideways in relation to the abdomen. They are poor swimmers, and often drift long distances without movement if they get dislodged from the aquatic vegetation.

They naturally inhabit many lakes in British Columbia, and are a critical part of the ecosystem. In 1949, biologists began stocking Mysis shrimp in other lakes and reservoirs. The Colorado Division of Wildlife introduced Mysis shrimp into Dillon, Taylor Park, and Ruedi Reservoirs in the early 1970s to feed the Kokanee salmon residing in the shallow coves and bays. At the time, the Colorado DOW had no idea how these shrimp would impact the trout below these dams.

In one sense, the stocking of Mysis shrimp backfired (as far as a lake food source is concerned), because they feed on zooplankton, which is also a key food organism for small Kokanee and juvenile trout. Unfortunately, Mysis shrimp are light-sensitive and prefer water temperatures of 57 degrees or colder. They migrate daily, residing in the dark, deep areas during the day and swimming into shallow water at night. As it turns out, the Kokanee salmon’s behavior is exactly the opposite, eliminating the opportunity for them to partake in the Mysis shrimp feeding frenzy. On a positive note, fishing below the tailwaters where Mysis shrimp were introduced has never been the same, because a shrimp diet makes trout grow big! The section below Taylor Park Reservoir is called the Hog Trough because of the enormous trout that feast on the high-protein shrimp.

Living Mysis shrimp are transparent, but they die and turn white shortly after they hit moving water. You’ll frequently see dead Mysis on weed-rich stream bottoms, but stomach samplings show that the fish key on the transparent version. One of the key identifying features is the dark, prominent pair of eyes.

During certain times of the year (i.e., the lake turning over, and higher flows during spring runoff), massive numbers of Mysis shrimp flow from the base of the dam, causing tremendous trout growth rates, and often gluttony.

Mysis-fed trout are extraordinary colorful—rainbows have brilliant stripes and gill plates, and browns have reddish-orange tails with dazzling red spots. Trout that key on Mysis shrimp can double their weight in one year, and often reach weights of 10 to 15 pounds or better. When large numbers of Mysis are released from the dam, nymphing is explosive. In fact, there are many times when you can fish two Mysis patterns at once. Because they are such a familiar food source throughout most of the year, a Mysis shrimp imitation is a great attractor in your two-fly nymphing rig. When there is a shortfall of Mysis shrimp spurting from the dam above, the large trout often key on tiny midges and mayflies to fill the void.

Fishing with crustacean patterns requires no special tactics, because most of the time you’ll be bouncing them along the stream bottom. Scuds, sow bugs, and Mysis are most often fished as attractors in a two-fly nymphing rig. Many anglers do well fishing scud and sow bug imitations around thick weed beds, where fish are accustomed to feeding on them. Off the scud, most anglers drop a small mayfly or midge pupa.

On occasion, you can fish a floating orange scud in certain rivers like the Colorado at Lees Ferry. Terry Gunn developed a pattern he calls the Unbelievable. According to Gunn “The Unbelievable was developed to imitate a dead floating scud. When the scuds desiccate, they turn orange and float. It is a rare occurrence and takes specific water flow regimes to produce this ‘hatch.’ First we need sustained high water flows, which allow the scud populations to develop along the littoral areas of the river, followed by a short low-water episode, which dries up these areas and desiccates the scuds . . . the best time frame for this low water is two or three days. Then another episode of higher water arrives, which washes the dead scuds into the river. When this occurs the fish key in on the floating scuds and the fishing is wide open. I have seen 100-plus-fish-per-rod days in this situation. It is rare, unpredictable, and crazy-good when it happens.”

To fool trout rooting for sow bugs, remove your strike indicator (to help prevent spooking the trout) and time your casting with its feeding pattern as the trout drops back to feed on the sow bugs that are floating downstream. Get into a position where you can see the trout feeding; but maintain stealth, and make a series of quick, accurate casts. Set the hook when the trout is eating, shifting, rising, or flashing—all signs that it may have taken your fly.

(Article reprinted with the permission of Fly Fisherman.)