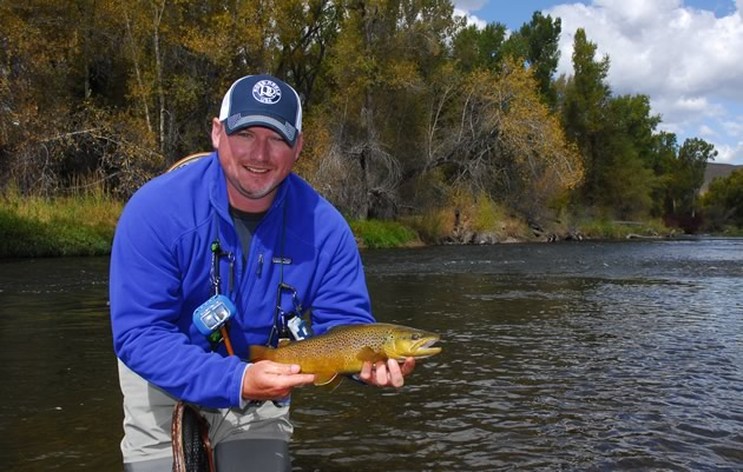 The Gunnnison and its tributaries run through a basin between the Collegiate Range and the rugged San Juan Mountains. The Gunnison basin has many angling options: fishing small, isolated creeks for native cutthroat and brook trout; sight-nymphing for 5- to 10-pound trout on the Taylor River; float fishing near the town of Gunnison; wade fishing the many accesses along the Lake Fork; or trekking into the Black Canyon or Gunnison Gorge. It’s no wonder locals affectionately refer to it as Gunnison Country.

The river carves its way through an assortment of cottonwood-lined resort properties, fishing clubs, and ranchland. The upper river has riffles, runs, deep pools, and pocketwater with abundant 9- to 17-inch rainbows and browns, and the occasional 20-inch fish.

In late August, Kokanee (landlocked sockeye) salmon migrate upstream from Blue Mesa Reservoir in waves, resting in the river’s deep runs and pools as they return to the Roaring Judy Fish Hatchery on the East River. Through September, they hit a wide variety of brightly colored flies, streamers, and a standard assortment of small, flashy nymphs. This “poor man’s Alaska” offers some of the most exciting nymphing of the season.

Wade access between Almont and North Bridge is so limited that most anglers float this section of river. Drift-boat conditions are moderate to easy when flows are above 800 cubic feet per second (cfs). Lower flows require fishing from inflatable rafts or pontoon boats.

To get to Palisades Park from Gunnison, travel north on Colorado Highway 135, turn left on Spencer Avenue (just west of Wal-Mart), make a right on Quartz Street, then turn left on Tincup Drive. Park on the north side of Palisades Park. A well-defined, 1/2-mile trail leads to the river.

There is an excellent float between McCabe’s Lane and the Turkey Take-Out just above Blue Mesa Reservoir. As the Gunnison River flows west of Gunnison, it widens, with well-defined gravel bars and mid-channel shelves, braided sections, riffles, runs, and deep pools. This is classic drift-boat water as long as flows remain above 450 cfs. This stretch also offers some of the river’s best caddis and Blue-winged Olive hatches.

To reach this area, drive west on Colorado Highway 50, turn left on CR 32, drive south 1/3 mile, and turn left into the boat launch area. With the exception of a 1/2-mile stretch directly below CR 32, and the Neversink Resort, the river is public on both sides down to the reservoir.

The Lake Fork of the Gunnison, which eventually flows into Blue Mesa Reservoir, rises on the northern slopes of the 14,000-foot San Juan Mountains, starting as small feeder creeks and growing rapidly before dumping into Lake San Cristobal near the small community of Lake City.

Between Lake San Cristobal and Gateview Campground there are 30 stream miles and nearly 14 miles of public access, with beautiful riffles, deep runs, and highly oxygenated pocketwater.

The Lake Fork freezes during winter. The ice melts enough to catch fish at the beginning of March and there is a small window of opportunity before spring runoff begins in April. Ideal flows on the Lake Fork are 150 to 300 cfs—anything over 400 cfs produces extremely difficult wading.

“Runoff typically peaks at 1,200 to 1,400 cfs and the river is unfishable for a four- to six-week period,” says Andy Bryant, manager of The Sportsman Outdoors and Fly Shop in Lake City. “The best fishing occurs between mid July and late October.”

The Lake Fork has strong populations of rainbows, cuttbows, browns, and Snake River cutts, as well as occasional brook trout. Fish as large as 22 inches are caught occasionally, but the average is between 12 to 14 inches. Lake-run fish enter the river in spring and fall. Autumn is excellent for the large browns that follow the Kokanee run. They take egg patterns, nymphs, and heavily weighted streamers.

The Taylor River is one of the most popular tributaries of the upper Gunnison. Taylor Reservoir, which fills a large area of Taylor Park, is fed by the upper Taylor, Illinois, Texas, and Willow creeks. These small tributaries have excellent summer dry-fly fishing for small to medium trout, but the tailwater below

Taylor Park Dam holds some of the largest trophy trout in the West.

Between the lower boundary of the “hog trough” (directly below the dam) and the junction with the East River at Almont there are 20 miles of river with 10 miles of public access. Most of the Taylor is a pocketwater paradise with excellent dry-fly and nymph fishing. Expect hatches of midges, Blue-winged Olives, Pale Morning Duns (Ephemerella inermis, E. infrequens), Green Drakes, caddis, and stoneflies. The dry-fly fishing in scenic Taylor Canyon is spectacular. Trout rise eagerly for attractors throughout the summer, and you can’t do much better than a Stimulator with a Copper John dropper.

The only access (other than private water leased by local guide services and fishing clubs) consists of a 11/2-mile stretch adjacent to the Roaring Judy Fish Hatchery. This stretch of riffles, runs, and deep pools has good dry-fly fishing.

The easiest walking access to the river is found by driving US 50 to Colorado 347, then along the South Rim of the Black Canyon to East Portal Road, which connects with the river between Crystal Reservoir and the canyon. There is approximately 1 mile of foot access at East Portal Road before the river becomes impassible due to the canyon’s sheer cliffs. Floating the Black Canyon from this point is not possible—and any attempt could result in death or injury.

There are six walking “routes” (actually scrambles) into the Black Canyon for anglers and hikers: three begin from the South Rim and three from the North Rim. The Gunnison Route, which starts near the South Rim Visitor Center, is the easiest trail into the canyon but is still extremely steep and strenuous. The trail drops 1,800 feet in 1 mile and includes an 80-foot section where a chain provides the only reliable handhold. The descent takes about 90 minutes—allow two hours for the return trip.

To hike these trails, you must first register at the appropriate visitor center, sign a waiver, and acknowledge responsibility for your own rescue. You should be in excellent physical condition beforeconsidering this adventure. The park allows only 12 registered hikers on each trail per day, so you may encounter relatively few other anglers at the bottom.

The Black Canyon is known for its spectacular fishing during the Salmonfly hatch the first two weeks of June. Golden Stones follow in late June and early July. There are also heavy evening caddis hatches in June and July, but day trippers rarely see them. There are primitive riverside campsites at the bottom of each hiking trail, making overnight stays—and evening fishing—a possibility.

Rod Cesario of Dragonfly Anglers in Crested Butte says the average brown trout in the canyon is between 14 and 17 inches, but there are numerous 17- to 22-inch fish. The rainbows—once decimated by whirling disease—are making a strong comeback, with many Hofer-strain rainbows ranging between 6 and 16 inches long.

Below Black Canyon of the Gunnison National Park, the river flows into the Gunnison River Gorge National Conservation Area. Visiting anglers sometimes confuse the gorge and the canyon, but locals do not. In the gorge, the cliffs are not as steep and access is easier than in the Black Canyon, making the gorge much more fishing-friendly. While guiding is not permitted in the canyon, it is allowed in the gorge. One of Colorado’s special experiences is a multi-day float trip through the Gunnison River Gorge during early summer, throwing Golden Stone and Salmonfly imitations along the bank from an inflatable raft.

Four trails—Chukar, Bobcat, Duncan, and Ute—provide foot access to the gorge. You’ll need a four-wheel-drive vehicle to access the trailheads, but the hike to the river is considerably easier than the park. For details on these trails, see blm.gov/co/st/en/fo/ggnca/ggnca trails.html.

Gunnison Country is a fly-fishing paradise in its purest form. Come sample it for yourself—a slice of heaven is only one cast away.

(Article reprinted with the permission of Fly Fisherman)