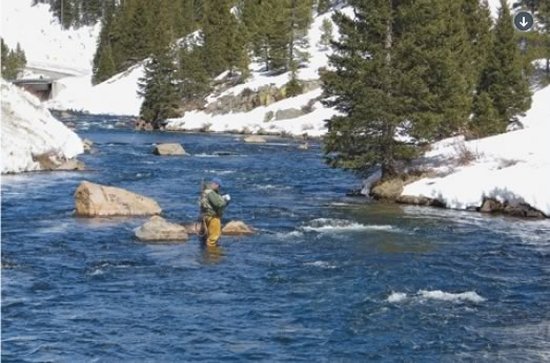 Some of my biggest revelations have come from thinking outside the box. Many fly fishers are creatures of habit, returning to the same spot, trip after trip, based on previous success. Trapped in a rut, these anglers tend to rely on the same techniques and strategies to catch their trout, regardless of the conditions or the season. While this rationale may provide comfort, over time it can limit your productivity. Don’t be afraid to experiment with your tactics and the water you fish.

While most anglers tend to target the honey holes—textbook riffles and runs that get hammered by hordes of anglers—I prefer to work the little nooks and crannies that rarely get fished. I’ve caught countless trout (some in excess of 5 pounds) in the swift-flowing, highly oxygenated boulder gardens most fly fishers overlook.

Pocketwater is best defined as a section of stream where boulders of all sizes (both protruding and submerged) are randomly sprinkled throughout a long riffle or run. The boulders divide the river into a series of cascades, producing deflections in the current commonly referred to as pockets. Think of each pocket as a miniature pool.

Some fly fishers avoid pocketwater because the difficult wading and repetitious casting required by the fast water is hard work. At the end of the day, the extra effort is worth it. In most cases, the more difficult the terrain, the better the fishing.

Reading the water is one of the greatest challenges to successful pocketwater fishing. Don’t let the faster currents and whitewater intimidate you. Simply break the river into small sections and cast to all the likely spots that provide a current break or offer seams between fast and slower moving water.

Typical holding areas are in front of, to the side of, and a couple of feet behind each boulder. Other candidates include the inside edges of either fast/slow or rock-created seams. Trout prefer these lies because seams channel a steady food supply.

I avoid fishing the swirling reverse current directly behind the boulders because it is too unpredictable for trout to hold in, and it’s difficult to get a good drift. To fish the water behind a boulder properly, cast 2 to 3 feet downstream to avoid getting trapped in the reverse current.

Trout often hold toward the end of the boulder pocket. These feeding lanes require less energy due to additional rocks slowing the pace of the current. These pockets also occur close to the bank, creating holding areas that are excellent for terrestrials and dry-dropper rigs.

Where several boulders gather to form a boulder garden, you’ll find a cosmic array of complex currents. Each seam becomes a tiny buffet line for trout, and these slots are excellent areas to find big fish with nymphs or large dry flies such as Stimulators, Parachute Adams, and Humpys.

Cover the water methodically by hopscotching upstream from pocket to pocket. Fish one pocket, then wade into it and fish the next pocket, repeating the process as you move upriver. With this strategy, you’re in the fast water only when moving between pockets, and often standing in the softer pocket you just finished fishing.

Between November and March, most anglers target traditional wintering holes, where transitional zones funnel into deep runs and pools. But there are still ample opportunities in pocketwater, especially if you tweak your tactics to match the winter conditions.

With diminished hatches and trout sustaining their lowest metabolism of the year, focus on deeper pockets, slower slots, tailouts, and plunge pools. Large trout still hold in pocketwater during the winter months due to the lack of fishing pressure there.

Tailwaters are your best pocketwater options through the winter months, as they rarely freeze in the first few miles below the dam. In Colorado, tailwaters such as the Frying Pan, Taylor, Blue, and South Platte rivers are reliable winter fisheries. The Green (Utah), North Platte (Wyoming), Bighorn (Montana), and others also remain free-flowing through the winter and have productive pocketwater sections.

I have had surprisingly good success in pocketwater during the initial phases of spring runoff. Don’t let the high, roiling water intimidate you—there is still good fishing out there.

High spring flows push the fish toward the edges of the stream, where they seek shelter from the swift current near the center. The off-color water is often advantageous because the trout are less wary, and less critical of your fly pattern.

The most productive pocketwater fishing occurs during late spring and midsummer (after runoff), through autumn. Starting in mid-July, water temperatures begin escalating and when oxygen levels plummet in the slower runs and pools, trout concentrate in pocketwater areas where they find increased oxygen and better feeding opportunities.

(Article reprinted with the permission of Fly Fisherman)